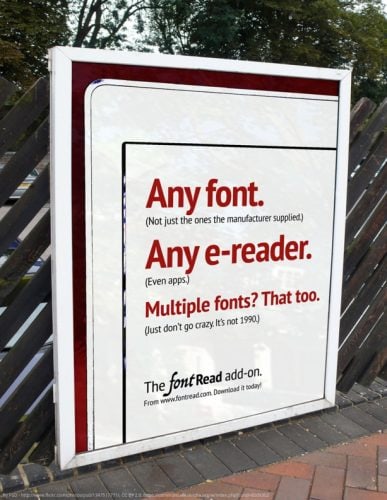 With the best of intentions, the Electronic Frontier Foundation has launched a new section of its website that is intended to highlight services and software features that consumers are denied because of DRM.

There’s a whole catalog of devices that are missing from our world. Things we’d pay money for — things you could earn money with — don’t exist thanks to the chilling effects of an obscure copyright law: Section 1201 of the Digital Millennium Copyright Act (DMCA 1201). That law makes selling a device that bypasses access controls on copyrighted works illegal, with criminal penalties of 5 years in prison (for a first offense!), and potential civil penalties in the millions.

It’s hard to notice what isn’t there. We’re aiming to fix that, with this work of “design fiction” — a collection of devices, services, products, and tools. These things could have been, and should have been, but never were.

This is a good idea, but unfortunately the EFF didn’t fact check the entries before they published their Catalog of Missing Devices.

In the space of about 20 minutes I found two questionable claimes relating to ereaders.

For starters, the EFF claims that you can’t install fonts on an ereader. As anyone who owns a Kobo, Pocketbook, or Onyx ereader can tell you, that just isn’t true. You can add a font to a Kobo ereader by simply copying the font files over to the device (I even posted instructions – it’s that simple).

Another section of the Catalog of Missing Devices insists that ereaders don’t have text to speech. Considering that you can buy Kindle, Pocketbook, and Onyx ereaders with this feature, clearly that is not the case.

To be clear, the Kindle has more of an accessibility feature than TTS, but that doesn’t change the fact this feature is currently available on ereaders you can buy right now – it is not “missing”.

The EFF is really stretching the definition of “missing” when they point to one device maker that doesn’t support a feature and use that as the basis for their argument about DRM. It is like using a car that runs on unleaded gasoline to claim that car makers won’t let you use diesel when in reality there are multiple vendors on the market, including some that make cars that run on diesel.

On the other hand, I doubt there are any laws making it illegal to mod that aforementioned car to run on diesel, but there are laws keeping you from installing a font on your Kindle.

So yes, I can see the point; however, these still aren’t “missing devices”.

You just finished reading EFF Launches DRM-Bashing “Catalog of Missing Devices” With Devices That Aren’t Technically Missing which was published on The Digital Reader.

Hi there everyone! My name is Marios and I have been a bibliophile ever since I remember myself! I enjoy reading more than anything in the world. I have read many books in any genre anyone can imagine, graphic novels, politics, history, help-yourself books, sports books as well as encyclopedias … END_OF_DOCUMENT_TOKEN_TO_BE_REPLACED