You are here: Home / eBooks / Why You Can’t Buy Books from the Kindle app on iPhone or iPad in 2018

Spoiler alert: It’s the same reason you couldn’t in 2017 or previous years for that matter.

Apple users: Did you know that you can’t buy Kindle books from the Kindle app on your iOS device? In fact, you can’t purchase them from the Amazon app either.

Even if you’re an Amazon Prime member and you want to download a free book. Nah, not possible.

In February 2011, the company announced something of an expansion to that policy along with introducing a new subscription service that gave iOS users a centralized location to manage subscriptions for content-based apps such as newspapers, magazines, music, and videos.

The new service essentially gave iOS users a one-stop-shop for subscriptions, and in exchange for greasing the skids and processing the payments, Apple wrote itself in for a 30% share of revenue from digital content sold over iOS devices. 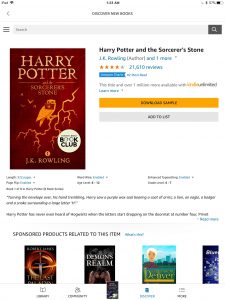 “Our philosophy is simple — when Apple brings a new subscriber to the app, Apple earns a 30% share,” Jobs said in the 2011 press release. “All we require is that, if a publisher is making a subscription offer outside of the app, the same (or better) offer be made inside the app, so that customers can easily subscribe with one-click right in the app.”

Being forced to price-match in-app sales while paying Apple’s 30% commission proved challenging for many businesses. Compounding the bad news, the same press release announced that apps would no longer be able to provide links bringing users outside of apps for transactions, which previously helped developers sidestep Apple’s policy and its tax.

In an interview shortly after Apple unveiled the new App Store rules in 2011, Rhapsody president Jon Irwin explained that the new rules strained his company’s business model: “Apple’s 30% will exceed the revenue on our product…It’s not a matter of making less money, it would be zero profit.”

The updated policy had anti-competitive leanings, to say the least, essentially forcing rival distributors of music, ebooks and so on to compete with Apple on pricing for digital goods while simultaneously having to pay Apple a 30% royalty on those sales.

Browsing the Kindle app from an Android phone.

Prime members can read for free and also get the option to buy.

The workaround? Use Safari or Chrome mobile web browser and use Amazon.com to complete your purchase. Then go back to the app. While companies cannot provide external links to direct sales within apps, you can manually navigate to external sales with a web browser.

That’s precisely what you’ll have to do to purchase Kindle ebooks (or download free books) on your iPhone or iPad. After buying them in a browser, they’ll be synced to your account and then you can access them inside the Kindle app.

Click here to view the original web page at www.techspot.com

I find tablets (either iPads or Android Tablets) more convenient when reading PDF files. For Kindle books, my Kindle Paperwhite is great!

How about you? Do you read ebooks on your Kindle or the apps for iOS and Android? Write your comments below!

Hi there everyone! My name is Marios and I have been a bibliophile ever since I remember myself! I enjoy reading more than anything in the world. I have read many books in any genre anyone can imagine, graphic novels, politics, history, help-yourself books, sports books as well as encyclopedias … END_OF_DOCUMENT_TOKEN_TO_BE_REPLACED